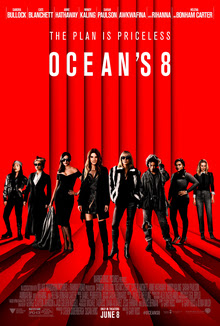 After almost a year of struggling waiting, but finally Ocean's 8 is here ! Ocean 8 scored an incredible 41.5 million dollars in 2 days, during the weekend between the Premiere (on June 8th) and Saturday June 10th.
Well, the cast needs no presentation: Sandra Bullock as Debbie Ocean, madame president Cate Blanchett as the club owner Lou, Rihanna as the hacker Nine Ball, Helena Bonam as the disaster designer Rose, Sarah Paulson as the "housewife" Tammy, Awkafina as the magician Costance, Mindy Kalling as the jwellery artisan Amita and, last but not least, the beautiful Anne Hathaway as the starlet Daphne Kluger.
Ocean 8 was produced by Steven Sodebergh and Susan Ekings, screenplay by Gary Ross and Olivia Milch and was directed by Gary Ross, who also directed the 2012 Huger Games and the 2016 Free State of Jones.
Since many teasers and publicity has been released, I will not talk about the plot ( above you will find the original trailer) because I need to comment it straight ahead ! But no wonders, I will try to avoid spoilers. 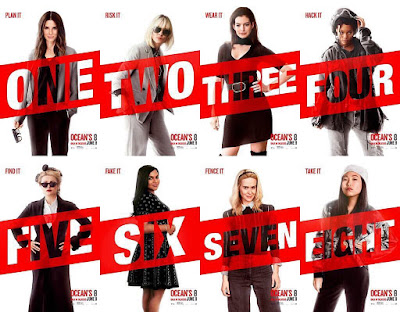 1) Debbie Ocean is amazing. She has the Ocean's blood and a huge sense of style. How she does it naturally? Wanna have those incomparable nonchalance stealing skills. I liked Sandra Bullock, always funny and punctual while acting: she's the mind of the operation and she's always one step ahead of anyone. I have found Debbie behavior ... nobile and snob in a way, which is not annoying.
2) Lou needs a separate chapter: Cate Blanchett at her finest, impeccable and extremely sexy. Lou, the club owner, has Blanchett's lower voice and ... appeal. She's the rocker, the "bi" character... Her partnership with Debbie crushes the screen ! And, as I read in a Variety article, hope there will be a sequel (or prequel) to explore Lou and Debbie's history.
3) Anne Hathaway as the starlet was extremely adorable ! Hathaway as great acting skills, mixed with a feminine natural grace ... love her dresses and, obviously the neck. Loved the scene when Anne meets the team.
4) Eight ball or Nine ball? Hahaha xD Rihanna was the hacker. Her acting was... ehm, a bit weird? Anyway, her character was OK. Personally, I would have added a more interesting personality on the hacker.
5) My only complaint... Sarah Paulson. Why an "Emmy awarded" (quoting Cate and Sarah's funny interview) grabbed only a sider role (Tammy). Don't know. 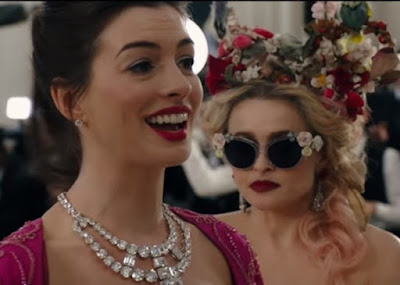 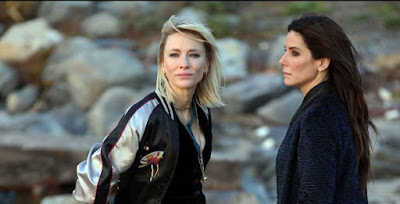 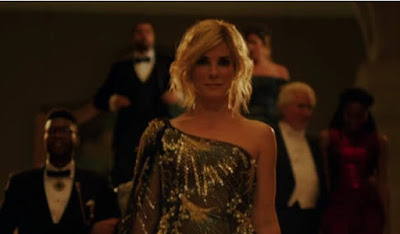 Rating: 4/5.
Classical Ocean mood, the movie was entertaining and charming. Gonna watch it again on streaming (x10 times?) and then, of course, on the big screen. 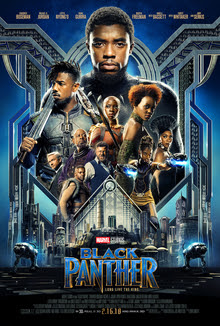 
The story is set in the African kingdom of Wakanda, an apparent poor and rural nation that shelters one of the most up-graded technologies in the world, thanks to a special material: the vibranium. The vibranium is the engine of the story: it brings former king of Wakanda to the Usa in order to punish some Wakandian rebels involved in the vibranium trading and than, after the king's death, the problem comes back again. Do the Wakandian need to keep secret their special material or do they share it in order to help black oppressed people around the world? This inner battle is portrayed on screen by the black panther and new king T'Challa and his counterpart Zuri, his most powerful contender to the throne.

"Black Panther" is the first Marvel story of a black super hero, and the world needed that desperately. After the 2016 black scandal and the 2017 Oscar winner "Moonlight", after the #MeToo movement and the Netflix /Amazon willing to portray borders realities, "Black Panther" proposes itself as the reference for all black people who need to be "told" on screen. Africa does not mean only poverty and unknown, impenetrable forest or rural areas, but also great advantage in technology and ... pride.
Pride as the amazing skills of the cast, who act, fight and share feelings in a ... super-powerful way? Intense, entertaining, funny, surprising... Black Panther is all this.

Has anyone thought  the super-heroes world is a white - exclusive ? Nobody has, and from now on, neither the cinema industry.