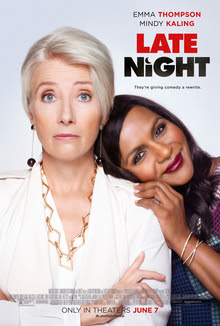 Late Night (2019) is an American comedy-drama film directed by Nisha Ganatra from a screenplay by Mindy Kaling. Starring  Emma Thompson, Mindy Kaling, Max Casella, Hugh Dancy and John Lithgow, the Late Night follows Katherine Newbury's path after presenting for more than 20 years an American talk show. But the show lacks of fresh air, since the screenplay has been mostly the same for 2 decades, with no one daring to advise the show-woman in making a single changement in the format. Everybody in the editorial board is to scared of Newbury's bad temperament but everything changes when a woman, the first, actually, joins the writer's team. Molly Patel is herself the light, the breath of fresh her and thanks to her contribute, the new version of the "she devil wears Prada" has found her smile back (almost).


Things that I've enjoyed: 1) Emma Thomson, Emma Thomson, Emma Thomson. Stylish, Cruel, Talented, Enchanting, Proud, Annoying... in one world, Amazing. She totally killed her role as Newbury, and, in my opinion, thanks to this interpretation, Thomson can be a strong contended in the Oscar running. Chapeau.
2) Mindy Kaling. After Ocean's 8 alongside stars like Sandra Bullock and Cate Blanchett, in this movie, she shines. Because of the beautiful screenplay she wrote and because of her acting. Natural, effortless. Chapeau part 2.
3) I liked so much the development of the story and both Newbury and Molly's evolution. The movie is entertaining without being boring in a single moment. And funny. Oh, finally a funny movie which is not lacking a plot structure and content.
4) The relationships: the special one between Kathy and her husband, and Molly's with the boys of the writing staff.
Thing that I have not linked: 1) The boys can pooop in the boys toilet too ! HAHA, joking.