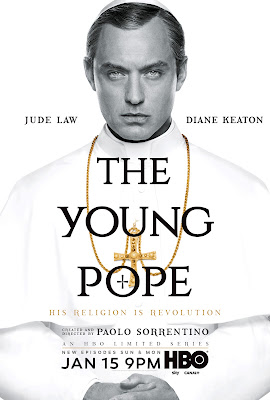 I have heard a lot about the Young Pope, but I have never watched it until I read about the sequel. The  images of the YP2, with the former pope played by the magnetic Jude Law walking almost naked in a beach, turn up my curiosity. The YP series, produced by a combo of Sky, HBO and Canal+ and directed by Paolo Sorrentino, aired in 2016, a year when my entertainment was already fulfilled with amazing series such as GOT, OITNB and Narcos.

So, I didn't went through it, until now. Saying that the YP deserves to be watched only after the end of our beloved series, is inaccurate. The mini-series, composed by 11 episodes, is intriguing and singular. Or maybe, I have thought this after watching the first episode. Strage bedfellows have come in, when pope Pio XIII (Law) has visions about sex, masturbation and all the luxurious world, which is forbidden to a church man, most of all to the pope. But, if the Pope does not believe in God, something unexpected might come up... or not? The fact that Pope Larry (which is Pio's name) first is highly persuaded to not show up in public, and to guide a Church highly convicted in the Vaticano's walls without being the usual benevolent spiritual guide for all the believers, was something new. Pio XIII believed he was more handsome than Jesus, that he was a predestinate prophet and the world didn't need to watch openly his face, if not passing through preyers and evoking God's presence first. The sexualized eye-contacts with Pio and the christian Ester or, more spicy, the chemical attraction between Law and the Church's marketer assistant, needed more script to build up. Was it sinful to ask for some hot Law's sex scenes? 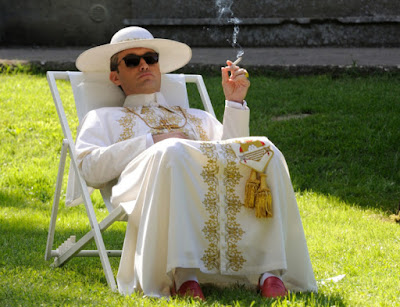 In my opinion, director Sorrentino has shown to the public who the clergy is, men's with passions (like the secretary with the football team Napoli), which are hidden (Pio's best friend can be a main example), evil (the case of pedophilia), forbidden (Pio's thoughts) and so on.
Being a church man does not mean being out-worldly, and we find this out when the secretary Voilello formulates the immortal question: " How stupid can be believing that a man cannot love God and a woman at the same time?".
A really powerful character was, indeed, Larry's "mother" Mary (played by Diane Keaton) : she connect's the pope past as an orphan and believes in the creation of the "saint-pope", helping him to open to the world, as we see in the beautiful, final episode. The final scene makes us wonder about the YP2, hoping that the new season will solve at least some of the inner conflicts that I brought up in this article... even, a little more speed up of the events will help the designation of a more interesting story to watch.